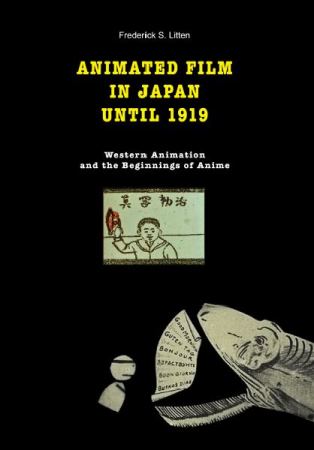 Animated Film in Japan until 1919.
Western Animation and the Beginnings of Anime

Available from the usual online shops, such as Amazon.

"[...] Animated Film in Japan until 1919: Western Animation and the Beginnings of Anime is a landmark in the international study of early animation. [...] Litten's work is of a superb standard."
Jonathan Clements, author of Anime: A History, on the All the Anime blog

"This book is a game-changer. [...] If you are at all interested in the early history of film or animation in Japan, you need this book."
Helen McCarthy, author of The Art of Osamu Tezuka, on Amazon UK

"Overall, then, we have in Litten's work an extremely valuable contribution to scholarship on the history of Japanese animation."
Alistair Swale (University of Canterbury, Christchurch/NZ) in Early Popular Visual Culture, vol. 17, nr. 2, 2019, pp. 218-219

"[T]he ultimate first chapter in the story [of anime]".
Jerry Beck, author of The Animated Movie Guide, at Cartoon Research

"[...] for anyone interested in animation history this is a wealth of knowledge [...]".
Rachael Ward on the animation for adults blog

In 2017 Japan celebrated 100 years of anime. The first Japanese animated movies were indeed released in Tokyo cinemas in 1917, reflecting years of imports of Western animated movies and knowledge. Yet local "printed animation", inspired by German models, had already been available for home projectors ("kinematographs") in Japan years earlier.

This study presents, for the first time in English, a detailed, critical and fully referenced account of local and foreign animation in Japan in the first two decades of the twentieth century. Recent research findings by Japanese colleagues (such as contemporary summaries of several animated movies by Kitayama Seitarō in 1918) and by myself (eg, a 1914 Japanese reference to printed animation for kinematographs and a reappraisal of Shimokawa Ōten's role in anime history) have been included. Biographies of the first creators of Japanese animated movies for the cinema (Shimokawa, Kitayama and Kōuchi Jun'ichi) can be found here as well as information on the three film companies they worked for (Tenkatsu, Nikkatsu and Kobayashi Shōkai). Many sources for the book are from the period covered, among them numerous Japanese journal and newspaper articles that have never been cited before.

This is an updated, revised and substantially expanded version of my 2016 book in German on the same topic. While the basic structure largely has been retained, text has increased by half and the bibliography has doubled to 332 entries (plus dvds and links to films on the internet). This book therefore provides the most comprehensive picture of early animation in Japan available in any language. (For the Japanese translation see here.)
Subject areas: anime history, transnational animation history, early Japanese film history.

Errata:
p. 46: The exhibition honouring Shimokawa as a mangaka was held in 1968, not in 1972.
p. 50: Tanaka Eizō only confirmed that Kitayama drew the "artistic" intertitles, at Tanaka's request.
p. 65: The quote on manga from "Karateppō" comes from the preface by Kayahara Kazan, not from the preface by Kōuchi [thanks to Nakagawa Yuzuru]
p. 70: In the second paragraph the date should be "end of July 1912", not "end of July 1917" [noticed by Nakagawa Yuzuru]
p. 77: The title of Shimokawa's presumably first animated movie, "Dekobō shingachō Imosuke inoshishigari no maki", can also be read as "Dekobō shingachō Imosuke shishigari no maki" with the same meaning.
p. 107: In the entry for July 1918 it should read "Kitayama Eiga Kenkyūjo", not "Kitayama Eiga Seisakujo" [thanks to Nakagawa Yuzuru]
p. 132: In [63] the publication date should be 2015, not 2013 [thanks to Jonathan Clements]